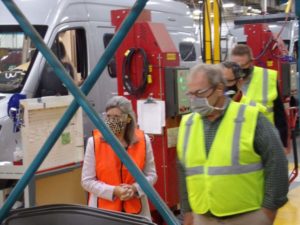 Republican Senator Joni Ernst says the economic stimulus plan drafted by a bipartisan group of House Democrats and Republicans could be the starting point for renewed negotiations.

“I do hope that we move forward with a package, but it does have to be focused on Covid-19 relief,” Ernst says.

On Tuesday, President Trump postponed negotiations until after the Election. A few hours later, Trump announced on Twitter he’d immediately accept bills providing relief for the airline industry and small businesses as well as another round of stimulus checks to individuals. The plan from the bipartisan “Problem Solvers” Caucus in the House calls for $1.5 trillion in spending

“It’s probably still a little higher than what we would want to see in the Senate, but — again — it is such a great starting place,” Ernst says.

House Democrats have passed two pandemic relief packages that stalled in the Senate. Ernst says the more than $2 trillion dollar price tags on those bills were too high, plus she’s opposed to provisions in those bills that would have provided more federal money to states and cities.

“What Iowa taxpayers tell me is why should I, when I do the right thing, have to bail out another state?” Ernst says.

Ernst made her comments after visiting a biodiesel plant in Mason City. Earlier today, Ernst toured Winnebago Industries facilities in Forest City. Ernst, who is co-chair of the 12-member Senate RV Caucus, notes RV sales have increased during the pandemic.

“People are fascinated with spending time as a family, but in a safe way and they have found that camping and RV-type activities really fill that gap where maybe they’re not able to do a traditional type of family get-away where they’re going to a hotel somewhere,” Ernst said.