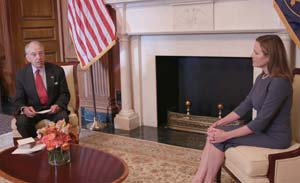 Confirmation hearings will begin Monday for President Trump’s choice to fill the vacancy on the U.S. Supreme Court and both of Iowa’s U.S. senators are serving on the Judiciary Committee.

Senator Chuck Grassley was chairman of the panel in 2018 when the president’s pick of Brett Kavanaugh was confirmed, after much contention. Grassley, a Republican, hopes it will be different next week with Judge Amy Coney Barrett.

“I hope the Democrats don’t make a mockery of the process like they did when I was chairing the committee when Kavanaugh was before us,” Grassley says. “I think everybody knows how much of a mockery that was.” Grassley says he has not made up his mind yet about confirming Barrett, while he did approve of her appointment as a federal judge in 2017 and today called her “very well qualified.”

“Although I’ve been pretty open about the fact that, since I voted for her three years ago, there would have to be something dramatic come up that I wouldn’t vote for her again,” Grassley says, “but I even told her that I was going to wait until after the hearing to make a final decision.”

The Senate Judiciary Committee has 22 members — 12 Republicans and 10 Democrats. Two Republicans on the panel are in isolation due to COVID-19, which raises the question of a possible 10-10 tie that would mean the nomination doesn’t get out of committee. Unless more members of the panel are unable to attend, Grassley says he is not concerned about a tie vote, even with two fellow Republicans in isolation with COVID.

“In some cases, it tends to be 10 days and in some cases it’s 14 days,” Grassley says, “but even if it’s 14 days, by the time we have to vote on it, the rules of the committee require that we lay over one week, so it would be sometime towards the tail end of the next week that we vote on it, so they would be beyond that 14 days.”

While Barrett is expected to attend the hearing in person, Grassley says he’s not sure how many other people will actually be in the room. “I would bet a lot of the members are going to be virtual and not in the committee room,” Grassley says. “I think I will be in the committee room because there’s plenty of distance. People, if they’re close to you, wear masks and they’re pretty good about the things you’re supposed to do.”

While the hearing starts on Monday, that day will be devoted to members of the committee making speeches about the nominee. The questioning will run next Tuesday and Wednesday, with each senator being allotted a total of 50 minutes to quiz Barrett about her judicial philosophy. Iowa Republican Joni Ernst also serves on the committee.