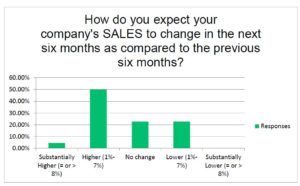 The latest survey by a group representing 22 of the largest businesses in the state finds a big jump in optimism for the third quarter of this year. Iowa Business Council executive director Joe Murphy says the overall survey index is up by more than 14 points.

“We’re very excited to report for the first time in 2020 the Iowa Business Council is projecting a positive economic outlook over the course of the next six months — and that’s really a significant increase in optimism,” Murphy says. The survey measures expectations for sales, capital spending, and employment for the next six months. Murphy says the survey optimism is at its highest level since the fourth quarter of 2019.

“While we are not out of the woods on the pandemic or the pending recession, I think there’s some glimmers of hope out there for Iowa businesses and for Iowa employment,” according to Murphy. One key is the survey number for expected sales.
“More than 55% of them have said that they expect sales to increase over the next six months,” he says, “which is really important not only for our members but for all Iowa businesses. When you think about the Iowa Business Council, their business partnerships, their customers and clients are really focused in on those Iowa companies as well. We view this as a positive metric for the state.”

Forty-one percent of the IBC businesses expect employment to increase in the third quarter. Murphy says that’s part of moving forward with the knowledge gained from what has happened so far with the pandemic. “I think just getting comfortable with being uncomfortable is a good way to think about it. However you slice it, the fact that we’re projecting optimism, positive economic sentiment, is certainly a good thing for us to celebrate right now,” Murphy says.

While there is optimism, he says IBC members continue to cite challenges with attracting and retaining a talented workforce as an issue that was there before the pandemic and continues now. For more on the survey, go to www.iowabusinesscouncil.org.