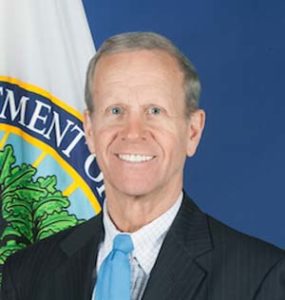 An official from the U.S. Department of Education says Iowa school districts are “a model” for districts in the rest of the country that have not reopened.

Frank Brogan, the Assistant U.S. Secretary for elementary and secondary education, talked early this morning via Skype with staff, students and parents in the Cardinal Community School District in southeast Iowa.

“You have managed to reopen in a way that has paid great attention to detail,” he said, “and everything has been incredibly, thoughtfully done — well thought through.”

The district is based in Eldon and has about a thousand students. The Cardinal Community website shows 20 students are currently quarantined due to Covid. Cindy Green, the district’s middle school principal, said they’re figuring things out day by day.

Katelyn McDaniel, a senior at the school, said mask wearing has become part of the routine and it’s been helpful to have one-way traffic lanes in the hallways.

“No one knew how it was going to go and I think a lot of people didn’t expect to actually stay in school for very long and I know there are some schools who have had to like completely shut down for a while,” she said, “but we haven’t and I feel like everything is just a lot better than what was going to be expected, like everything’s just working out really well this year.”

High school principal Landon Miller is also head coach of the Cardinal football team. Miller he told Brogan coming up with individual learning plans for each student has been important.

“Always having that thought process of what we can do better,” he said.

The Cardinal district serves the communities of Agency, Batavia, Bladensburg, Eldon, and Selma.