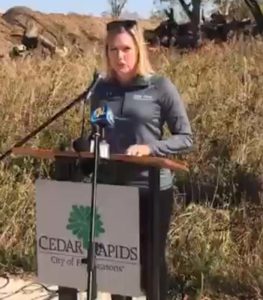 Almost two months from the August 10th derecho the city of Cedar Rapids is nearly done with the first round of picking up down trees.

Public Works Director Jen Winter gave an update Wednesday afternoon. “To date, we have hauled nearly 1.5 million cubic yards of tree debris off of the city streets. And we have finished an initial first pass on almost 90% of the streets,” according to Winter.

Parks and Recreation director Scott Hock says they are still determining how much of the tree canopy was lost. “Easy to say we’re going to be over 65 percent. Some of that is due to the fact that a lot of our canopy that was lost came from our established trees — they went down a lot quicker — some of our younger trees survived. They had a little more flexibility to them. There’s still a lot more to come out though,” Hock says.

Winter says they expect to make at least two more passes through the city to pick up any missed trees. She says they will also start focusing more on the derecho debris that was not tree-related. “Once this first pass is completed in all areas, additional resources will be dedicated to this other storm-related debris. In the meantime, our solid waste and recycling staff are also assisting the contractor with this inorganic debris removal as resources and equipment are available,” Winter says.

She says some of the non-tree debris has already been picked up. She says approximately 200 tons of that debris has been picked up from approximately six percent of the streets,” Winter says. Cedar Rapids crews are also working to handle more than 40,000 trees along streets, and are prioritizing hazardous limbs that are at risk of falling and creating further safety issues.