You are here: Home / News / Iowa scientists say lessons of pandemic may apply to climate hazards 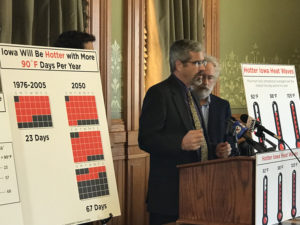 More than 200 researchers and faculty from 37 colleges and universities in the state have co-signed a statement, suggesting this year’s pandemic, drought and derecho illustrate the importance of having science guide public policy.

University of Iowa professor Eric Tate, a lead author on this year’s Iowa Climate Statement, says the most vulnerable people tend to suffer disproportionately during disasters, so emergency planners should pay attention to how those groups fare during this year’s pandemic.

“These are lessons that I think can be directly applied to climate change hazards,” he says.

Tate and the other scientists argue it’s critical for communities to draw up plans in advance to protect lives and property during natural disasters in a changing climate.

“Resilient communities and households have a greater ability to withstand disruption and absorb impacts from climate hazards as well as adapt to change,” Tate says.

The scientists warn political polarization that has de-legitimized science has made the pandemic worse and it’s important for leaders to promote expert guidance when lives and property are in peril.