You are here: Home / Fires/Accidents/Disasters / Iowa drivers in the top 10 for hitting animals on roadways 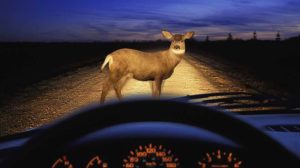 A report from Iowa’s largest auto insurer shows the state is still one of the most dangerous for drivers at risk of hitting wildlife, as well as pets and livestock.

Kelly Pargett, a spokeswoman for State Farm Insurance, says Iowa drivers have a 1-in-58 chance of colliding with an animal while on the road. She says the company had 40,000 Iowa customers report incidents involving animals in the past fiscal year.

Pargett says, “Iowa is ranked 7th in the nation for animal collisions, most of which are still deer, but there were other animals — dogs, cats and then, of course, farm animals for this part of the country were a huge category this year.”

It’s mating season for deer, plus, it’s harvest season across Iowa and the hundreds of tractors and combines are driving deer by the thousands out of the fields and onto the highways. While 67% of the reported animal collisions involved deer, other animals drivers had unfortunate encounters with included: cows, squirrels, turtles, raccoons, rabbits, rats and opossums.

“Iowa being the Hawkeye State, a lot of birds — birds is a big category this year,” Pargett says. “They swoop down and they’re doing enough damage to have the driver file a claim and nationwide, 15,000 of those in the bird category are turkeys.”

The likelihood of an animal collision more than doubles during October, November and December. 2020 being the year of coronavirus, so many people were staying home at the start of the pandemic, the number of drivers on the roads dropped — and so did the number of accidents.

“One thing we did see this year is the difference in March of this year compared to March of last year,” Pargett says. “This year we saw a 20% decrease, which is over 70,000 less claims reported.” Iowa’s seventh-place ranking this year is down from fifth last year. Those above Iowa for the riskiest states for animal collisions are, number-one: West Virginia, followed by Montana, Pennsylvania, South Dakota, Michigan and Wisconsin.