You are here: Home / Fires/Accidents/Disasters / Many still need help cleaning up 2 months after derecho 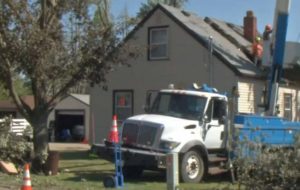 Today is the two-month mark since the derecho blew across the state and there is still debris that some people just can’t take care of themselves.

Mark Nolte of Iowa City talked with KCRG TV about helping in the immediate aftermath of the storm.

“It was crushing when you saw the need block after block after block,” Nolte says. Nolte says the biggest need was for people who physically could not clean up the debris or can’t pay to have the work done. “There was one elderly Vietnam vet that was not able to get out of his house. He was so appreciative of all the work because he didn’t know what to do, what to ask,” Nolte says.

While Nolte says he isn’t getting as many calls for help now, there is still a need all over Linn County and the surrounding areas. Jnae Peterman of Waypoint Services told KCRG TV she is taking calls every day. She says that is due to the massive number of homes hit by the storm. She says there just aren’t contractors out doing tarping and boarding up windows and things like that.

Peterman says volunteer groups are still trying to help as many people as quickly and as correctly as they can, but says it’s going to take hard work from volunteers like Nolte to help people get people back to a sense of normal. “Be patient, I know it’s really hard,” Peterman said, “especially we have people calling and the trees are still on their home. They’re working to get volunteer groups out there and get it done.”

People still in need of help should contact Waypoint Services to get on the list. For more information go to WaypointServices.org, or call Waypoint at 319-365-1458.