You are here: Home / News / Ernst and Greenfield on the road this weekend 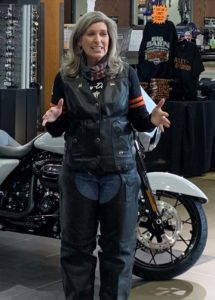 Republican Senator Joni Ernst hosted a motorcycle ride across the state this weekend, with rallies in five different cities.

It started Saturday in Sioux City, then a stop in Carroll where many in the crowd were waving Trump flags. Ernst began by acknowledging the polls which show her tied or trailing Democratic challenger Theresa Greenfield.

“Folks, is it a tough election cycle or what? Whew! Man!” Ernst said, getting affirmations from the crowd. “OK, so it is a tough, tough, tough year, but  you know what?  I’m going to finish first!.”

Ernst had invited guests speak at each stop along the ride’s route. It was former Iowa Governor Terry Branstad in Carroll, making his first appearance after resigning as U.S. Ambassador to China.

“Donald Trump, our great American president,” Branstad said, to hearty cheers. “…Joni Ernst was there to support the president all the way.”

Ernst told reporters her fate isn’t tied to Trump’s and she’s running her own race.

“I think we’re on a great path,” Ernst said. “I mean I feel the enthusiasm and the energy out there and that’s what’s going to take us over the finish line.”

“Joni and I have been a team now for six years,” Grassley said. “…We’ve got to re-elect Joni to keep the team in place.” 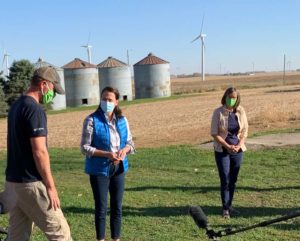 Greenfield campaigned in northern Iowa this weekend, touring a farm near Buffalo Center and visiting with small groups at stops in Estherville and Lake Mills.

“We’re working hard in our campaign to follow public health guidelines…and encourage people to mask up,” she told Radio Iowa.

“There’s a lot of excitement in this campaign,” Greenfield says. “…I stay focused on the basic issues. The things that really affect people’s lives, in places like this.”