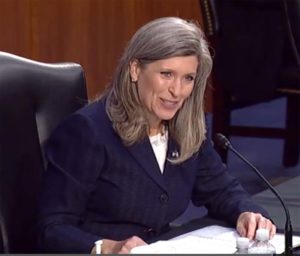 Republican Senator Joni Ernst today said the focus of Senate hearings for President Trump’s U.S. Supreme Court nominee should be on Amy Coney Barrett’s judicial philosophy, not on her religion.

“I’m struck by the irony of how demeaning to women their accusations really are,” Ernst said, “that you, a working mother of seven with a strong record of professional and academic accomplishment, couldn’t possibly respect the goals and desires of today’s women.”

Ernst joined the Senate Judiciary Committee in 2019 and this is the first time she’s participating in hearings for a Supreme Court nominee.

“Like most Americans, I’m not a lawyer,” Ernst said. “I bring a slightly different perspective onto this committee.”

Ernst, who spoke shortly before noon Iowa time, said her test for a justice is whether they will defend the Constitution.

“It frustrates me and it frustrates my fellow Iowans that the Supreme Court has become a ‘super legislature’ for a congress that frankly won’t come together, discuss these tough issues and do its job,” Ernst said.

Barrett, if confirmed as expected by the Republican-led Senate, would become the fifth woman to serve on the nation’s highest court. Ernst began her remarks today by noting this year is the 100th anniversary of women’s suffrage and Ernst said attacks on Barrett’s faith and family life are out of bounds.

“Women all over the world are painfully familiar with this strategy,” Ernst said. “We are all too often perceived and judged based on what someone else needs or wants us to be, not on who we actually are.”

Iowa’s other U.S. Senator, Republican Chuck Grassley, also serves on the Senate Judiciary Committee. He delivered an opening speech early this morning. Barrett will get to speak later today. The hearings on Barrett’s nomination are expected to last through Thursday.