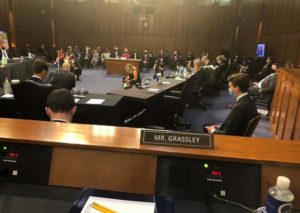 Republican Senator Chuck Grassley today dismissed “doomsday predictions” about how Amy Coney Barrett might rule as a member of the U.S. Supreme Court.

“Democrats and their allies shouldn’t claim to know how any judge would rule in any particular case,” Grassley said. “Just look at history.”

Grassley delivered an 11-minute defense of President Trump’s nominee for the U.S. Supreme Court this morning as hearings on Barrett’s nomination got underway.

“A good judge understands it’s not the court’s place to rewrite the law as it sees fit. It’s not his or her place to let policy, personal or moral principles dictate an outcome of a case,” Grassley said. “We are fortune Judge Barrett’s record clearly reflects this standard.”

“Judge, you’ll no doubt be asked how you’ll rule on questions and issues,” Grassley said. “I expect you’ll follow the example of Justice Ginsburg. A nominee should offer no forecasts, no hints of how he or she will vote.”

Grassley recited what he described as “high praise” of Barrett’s record as a law professor at Notre Dame, a judge and as a mother.

“To sum up, Judge Barrett’s qualifications and character are impeccable,” Grassley said. “Unfortunately, I expect the minority will try to rustle up baseless claims and scare tactics as they’ve done for decades, anything to derail the confirmation of a Republican nominee.”

All 22 members of the Senate Judiciary Committee will deliver opening statements today. Democrats have criticized the timing of Barrett’s nomination for the November 10th U.S. Supreme Court hearing for a constitutional challenge of the Affordable Care Act. Iowa’s other Republican Senator, Joni Ernst, joined the Judiciary Committee in 2019. Her remarks will come later, then Barrett will speak.