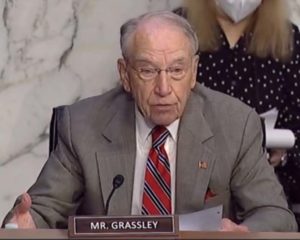 “Democrats are painting the judge as heartless and on a mission to scrap the health care law,” Grassley said. “Frankly, that’s absurd.”

Grassley made his comments this (Tuesday) morning during his half-hour turn in the committee to ask Barrett questions.

“Have you committed to the president or anyone else that you will vote to repeal the Affordable Care Act if confirmed to the court?” Grassley asked.

Barrett responded: ‘Absolutely not. I was never asked and, if had have been, that would have been a short conversation.”

Grassley replied: “My position has always been that legislative history can be instructive to the intent of the statute, so judges should not completely disregard it.”

Grassley said congress “can be more careful” about drafting laws, but when there’s a dispute about the law, judges should pay attention to how congress drafted, debated and passed the law. Early this morning during a conference call with Iowa reporters, Grassley accused Democrats of trying “to stoke real fear” that confirming Barrett to the Supreme Court will lead to the demise of the Affordable Care Act.

“There’s no evidence ot suggest anything of the kind,” Grassley said. “In fact, legal scholars have expressed doubt that the court would strike down ObamaCare, with or without Barrett.”

The Republican-led Senate is heading toward confirming Barrett to the Supreme Court by the end of October. The U.S. Supreme Court is scheduled to hear an appeal related to the Affordable Care Act on November 10.

Barrett has previously questioned a previous opinion that upheld the ACA, based on the court’s majority conclusion that the law included a tax. With that mandate now repealed by congress, Barrett said the previous focus on taxation will not be a consideration for the court in the future.