You are here: Home / Agriculture / Massive grain bin under construction in Mason City 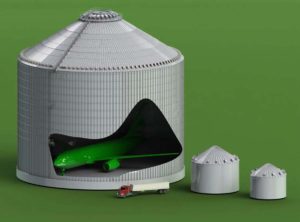 Sukup rendering of the grain bin.

Construction is underway in Mason City on what will be the world’s largest freestanding grain bin.

Sukup Manufacturing of Sheffield has designed the bin, with a peak height of 155 feet and a capacity of 2.2 million bushels, for the Golden Grain Energy ethanol production plant. Sukup president and CEO Steve Sukup says the 165-foot diameter bin will be large enough to hold a Boeing 767 jet.

“For the ethanol plants, for them to be able to bring in grain, they’re marketing also,” Sukup says. “They want to bring in the grain as soon as possible at the price they like, so it gives them a lot of opportunities throughout the year to be more efficient with their ethanol.”

Golden Grain CEO Chad Kuhlers says the bigger grain bin will increase the company’s total storage capacity from about 1.275 million bushels to almost 3.5 million bushels.  “In addition to this grain bin, we are also putting in additional corn dumping capability so that we can receive a little bit faster,” Kuhlers says. “Our goal is to be able to increase our amount of storage onsite from approximately nine days of production all the way up to 30 days of production.” 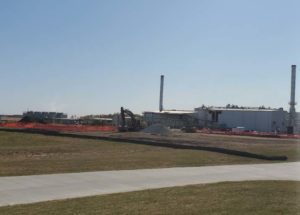 Kuhlers says the increased storage capacity can help with production around holidays and other times when corn can’t be delivered. He notes Christmas and New Year’s are both on Fridays this year, and a lot of people don’t want to deliver corn that week in between the two holidays.

“You’ve got seven days and you’ve got to basically receive essentially all the corn if you were completely full to completely empty in three days in between those two holidays,” Kuhlers says. “Heaven forbid, there is a snowstorm or other event that would prevent us from receiving corn during that time, otherwise you’re going to be scraping the bottom of the barrel to keep the plant operational.”

Construction on the bin is scheduled to be completed in May or June of next year.