You are here: Home / News / Warm October is marauding season for pirate bugs 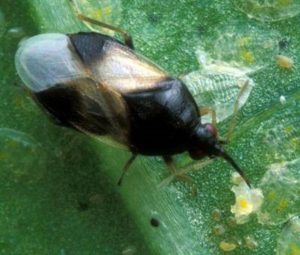 A bug that’s common from Iowa all the way east to the Atlantic Ocean and south to the Gulf of Mexico is poking at humans this time of year. It’s called the minute pirate bug.

“This is the insect that bites us on the prettiest, nicest, warmest days of October,” says Iowa State University entomologist Donald Lewis.

As for how humans can defend themselves from pirate bugs, insect repellants haven’t been found to work. Once the pirate bugs’ food supply of other insects dwindles in the fall, the best defense for humans is wearing long sleeved-shirts, jeans or pants and socks and shoes.

“When they land on your bare or exposed skin, they poke you with their blunt little beak to see if you are food,” Lewis says. “When you’re not, they give up, but in the process of poking you, it does hurt way out of proportion to the size of the insect.”

Pirate bugs — also known as insidious flower bugs — are oval shaped and about a fifth-of-an-inch long. Lewis says the insects will go dormant once it gets colder.