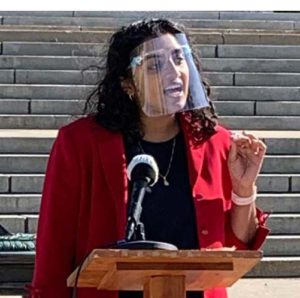 A doctor and a firefighter from Fort Dodge, speaking at a midday news conference organized by Joe Biden’s campaign, denounced President Donald Trump’s plan to hold a rally tonight in Des Moines.

Dr. Megan Srinivas of Fort Dodge said Trump will be putting the lives of people in his audience at risk. “We’re talking about a potential super-spreading event that could dramatically increase the already rising trajectory of cases, hospitalizations and deaths in our state,” she said. “That is not somebody who cares about Iowans.”

A record 473 Covid patients were being treated in an Iowa hospital overnight. Nathan Conrad, a firefighter and paramedic in Fort Dodge, is also the president of the department’s union. Conrad said Trump hasn’t taken the virus seriously.

“You didn’t see him wear a mask for how long?” Conrad asked. “…He doesn’t listen to reality.” 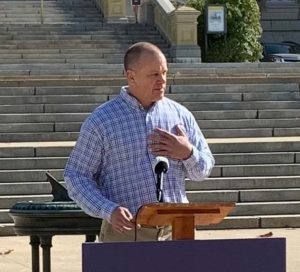 A member of the Fort Dodge Fire Department just tested positive today, according to Conrad, who said his daughter had the virus, but the rest of the family didn’t catch it.

Nick Salazar of Muscatine, state director of the League of United Latin American Citizens, also spoke at today’s news conference on the statehouse steps. He said Trump has used Latinos, particularly those who work in meatpacking plants, “as political piñatas.”

“When the virus first arrived here in Iowa and in the country, he didn’t take it seriously and that sent a message to a lot of folks, especially here in Iowa, that it’s no big deal,” Salazar said. “It sent a message to the corporations…that you don’t have to protect your workers. We will keep your business running.”

Trump’s campaign manager has said the president’s rally schedule shows Trump is “outworking” Biden. Rally-goers will have their temperatures checked and will be given a mask. Airport officials have been told to prepare for up to 10,000 people.