You are here: Home / Fires/Accidents/Disasters / Dry conditions continue to cause concerns about grass and crop fires 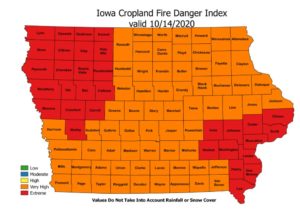 Story County Emergency Management Coordinator, Keith Morgan says several factors led to the ban. “We have seen an increase in the number of field fires that are out there — and the vegetation is getting dry — and also the forecast doesn’t have any precipitation to speak of in it,” Morgan says.

There was a large fire Sunday in a cornfield between Maxwell and Nevada and he says they want to try and prevent any more. Morgan says farmers are in the fields harvesting and that can lead to fires. “It happens once or twice a year where some of the field machinery itself has fires. And we ask that the farmers out there pay close attention — making sure that they clean their equipment as much as possible — that it’s in good working order,” Morgan says.

He also cautions everyone to be careful about where they stop their cars when they are going to parks and wildlife areas. “Because you can park a vehicle in tall grass and that also can start a fire. So, we are trying to do all these things as much as we possibly can do to reduce the risk,” he says.

Morgan says there are some things you can still do while the ban is in place. “I encourage people to go to the State Fire Marshal’s webpage. they have a link there that will take you right to the code so that you can look at it,” Morgan says. “Part of the code does permit the use of outdoor fireplaces, barbecue grills, and some other exceptions. If you are going to do that, we ask you to be very cautious.”

Morgan says it’s important to never leave a fire unattended and be aware of how the wind can impact your situation.
“The wind creates these risks in two ways. First off, the embers travel further away from an area around you that may look like it’s green,” according to Morgan. “And the second thing is — if that ember does get into a place where a fire does start — the fire grows much faster and travels across the ground much faster.”