You are here: Home / News / Ernst says Barrett attacked because she’s not in ‘lockstep’ with liberals 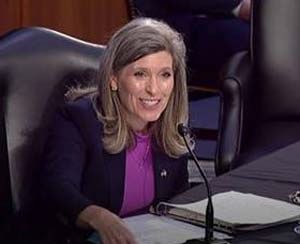 “The Democrats seem to claim that you wouldn’t be an adequate replacement for Justice Ginsburg because you do not march in lockstep with her judicial philosophy,” Ernst said. “…What I hear so often from the left, many of us on the right often do…because we don’t hold the same views that those on the left do, we shouldn’t be serving in the roles that we are in.”

Ernst, as a member of the Senate Judiciary Committee, had another opportunity to ask questions of Barrett today. Ernst asked Barrett to share grains of wisdom for young women, including Ernst’s own daughter who is a pre-law student at West Point. Barrett’s advice: be confident, know what you want and go get it.