You are here: Home / News / Grassley urges Barrett to back cameras in federal courtrooms 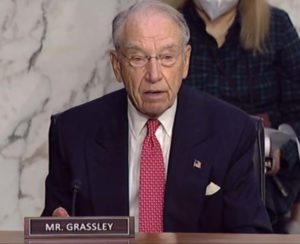 Iowa Senator Chuck Grassley is urging President Trump’s Supreme Court nominee to support allowing cameras in the courtroom when, as expected, she becomes a justice on the nation’s highest court.

“Many of us believe that allowing cameras in the courtroom would open the courts to the public and bring about a better understanding of the judiciary,” Grassley said this morning.

Grassley acknowledged it isn’t not a popular prospect for many federal judges.

“I’ll probably at 87 years of age won’t live long enough to see done, but I’ve discussed cameras in the courtroom and introduced legislation on that over the last 15 years,” Grassley said.

Grassley made his comments this morning during the third day of Senate Judiciary Committee hearings on Barrett’s nomination to the Supreme Court. Grassley, a Republican, has signaled he’ll vote for her confirmation, calling Barrett “an outstanding candidate” for the opening on the Supreme Court and a person who understands
the appropriate role of a justice.”