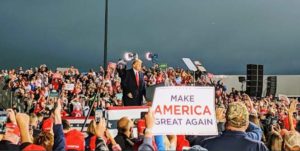 President Donald Trump greeted what he called a “beautiful crowd” of thousands of cheering supporters at the Des Moines Airport tonight.

Trump touted federal disaster aid for farmers hit by 2019 flooding as well as the $28 billion in trade disruption payments his administration has sent to farmers over the past two years.

“I just hope you remember that on November 3rd,” Trump said, as the crowd cheered. “Nobody else would have done it.”

Trump recounted a White House meeting he had with a group of farmers who he said stoically expressed their desire for a “level playing field” in international trade rather than the federal subsidies he promised as he engaged into trade negotiations with China. Trump joked about the extra payments he directed the USDA to make.

“That got our farmers even, in fact I shouldn’t tell you this because they don’t like this, but some of the farmers were making more money the way that I was doing it than by working their asses off, all right,” Trump said, as the crowd laughed. “They were very, very happy, but no — we took care of our farmers. No other president’s going to do that.”

President Trump tweeted this picture of the rally.

Trump touted his administration’s decision to allow a higher blend of ethanol to be sold year-round and he mentioned China’s recent record purchases of corn and soybeans.

Bill Norton, a dairy farmer, drove more than two hours to Des Moines from Wilton to see the president. He said Trump will be recognized by historians as one of the greatest ever.

“When you look at what he has done for our country, whether you like him or not, I don’t see how people can turn away from that,” Norton said.

Trump, who spoke for nearly 90 minutes, decried what he called “suppression” polls, but Trump also predicted he would win Iowa’s six Electoral College votes again. Polls show Democrat Joe Biden leading or tied with Trump in Iowa. Governor Kim Reynolds, who spoke about an hour before Air Force One landed, told the crowd momentum was on Trump’s side.

“Don’t believe the polls. Don’t believe what the media is telling you,” Reynolds said. “…People are fired up for Republican victories on November 3.”

After Trump had been on stage for about an hour, he began talking about an Iowa wrestling icon who won an Olympic gold medal in 1972 and 15 national championships as a Hawkeye coach. Trump announced he would award Dan Gable the Presidential Medal of Freedom in a ceremony in the Oval Office. Gable told the crowd Trump reminded him of some of the athletes he coached.

“This guy’s already a one-time champion, but because he’s open for learning and he’s already very competitive, he’s going to be a multi-champion president of the United States of America,” Gable said, to cheers and the crowd then started chanting “four more years” as Trump applauded and Gable left the stage.

Joe Biden released a written statement in response to Trump’s Des Moines rally, saying Trump came to Iowa to “distract from his record” as president rather than “offer a helping hand” to those who’ve lost their jobs during the pandemic or reveal “a plan to get the virus under control.”