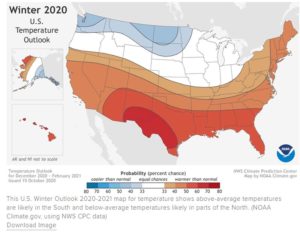 The National Weather Service released its annual winter outlook Thursday with defined outlooks for either warm and dry or cold and wet conditions going into the winter season.

But Climate Prediction Center Deputy Director Mike Halpert says it gets a little bit more complicated when you look at the jetstream and its impact on Iowa. “The Iowa, Wisconsin area often times falls in between or becomes very uncertain as to whether they become drier as a drier signal as the jetstream shifts further north or becomes wetter as it doesn’t shift quite as far,” he says. “So the forecasts for Iowa are actually in the equal chance category so there’s an equal chance for wet or dry, warm or cold.”

Dave Miscus is a drought expert at the CPC. He says our temperatures over the next several months will likely dictate what we expect come spring as far as ongoing drought conditions go even if we do end up in a wetter than normal pattern. He says once the soil freezes in the wintertime the soil doesn’t get into the soil and then we have to wait until spring to get any soil moisture recharge.

He says if the soil freezes soon before any more precipitation, we enter the winter waiting. “Not looking too good for removing that drought in especially western Iowa — which has been lingering for the last six to nine months here. We’ll have to wait and see what the spring brings,” Miscus says.

The outlook released Thursday has higher probabilities or colder and wetter conditions to our north along with drier and warmer conditions to the south, but nothing is definitive at this point, especially not knowing exactly how strong the developing La Nina pattern is going to be.