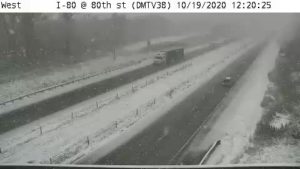 A snow squall hit central Iowa this afternoon and created winter driving conditions on the roadways.

“Snow squalls are very intense rates of snow — possibly combine with strong winds of 40-miles-an-hour or more. In this case, it was mainly the really heavy snowfall that fell — it can accumulate very rapidly, ” according to National Weather Service Meteorologist Jeff Zogg.

Zogg says they received nine inches of snow at the NWS office in Johnson where he works. He says the most intense part of the snow squall was in central Iowa from Dallas into Jasper counties, but much of the rest of central Iowa did receive some snowfall. 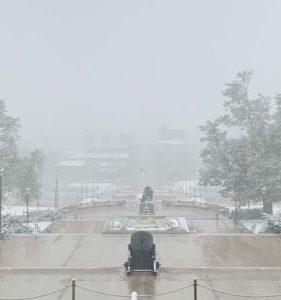 Snow squall from the west side of the Iowa State Capitol.

He says snow squalls don’t happen that much and they just recently started sending out warnings about them.

He says they have only sent out two snow squall warnings since they started issuing them last year. The other warning was last year in the Iowa City area.

Zogg says the snow likely won’t be around too long. “We would expect the snowfall to melt – maybe not all today yet — but possibly tomorrow. We did receive quite a bit of snowfall here in central Iowa, so it will take a while for it to melt,” Zogg says.

Zogg says the timing of this snowfall is unusual. “Typically our first one-inch snowfall in central Iowa occurs right around November 26th,” Zogg says. “So this is pretty early and pretty unusual.”

Today’s snow came after snowfall on Sunday across many counties in north and central Iowa that was reported at less than an inch. 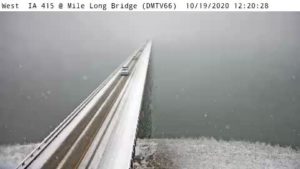