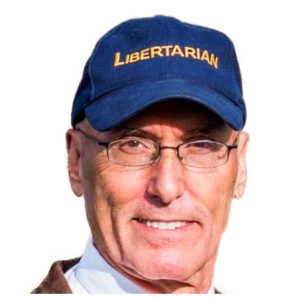 “Libertarian ideals are what our Iowa was founded upon. Look at our state motto. ‘Our liberties we prize and our rights we will maintain.’ That is pure Libertarianism,” he says, “so it hasn’t been spreading as fast as I would have hoped, but most Iowans that I’ve spoken to in all of my campaigns have been in total agreement that the Democratic and Republican gridlock is not good for this country.”

Stewart says voters want a simpler federal government. He proposes that no bill in congress be longer than five pages.

“A thousand page bill, no one can read that except a lobbyist and a lawyer and a five-page bill everybody could read,” Stewart says. “We’re not going to make people read it, but at least they could read it.”

Stewart, a retired businessman, says no federal program should continue automatically and there should be votes in congress every 10 years to reauthorize spending. As for spending on this year’s U.S. Senate race, Stewart says he doesn’t have the bankroll to compete with the spending on behalf of Republican incumbent Joni Ernst and Democratic challenger Theresa Greenfield.

“I would estimate that about 98% of Iowans are tired of politics as usual, “Stewart says. “And, of course, as Libertarians we believe we offer better solutions.”

Stewart says the U.S. government should not impose tariffs and he says all U.S. wars should end — including the war in Afghanistan, the war on drugs and the war on poverty.