You are here: Home / Business / Unemployment rate drops below 5 percent 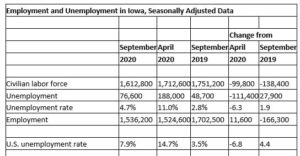 Iowa’s unemployment rate dropped by more than one percent in September.

Iowa Workforce Development reports the September rate is 4.7%, which is down from 6% in August. It is the fifth consecutive month the state unemployment rate has dropped since peaking at 11% in April during the height of the pandemic.

The number of unemployed Iowans is estimated at 111,400 lower than that April peak. Leisure and hospitality gained the most jobs in September at 4,100, and Workforce Development says those were predominantly jobs at eating and drinking establishments.

IWD says there are 64,000 job openings across the state.