You are here: Home / Sports / Iowa player will kneel during National Anthem Saturday 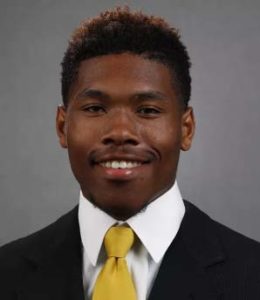 Iowa sophomore wide receiver Tyrone Tracy says he will kneel during the playing of the National Anthem prior to the Hawkeyes’ season opener at Purdue.

It has been a topic since charges of racial disparities in the program came to light during the summer. “It’s very big to me personally,” Tracy said. “Just because I know how African-Americans are treated in the United States. Me taking a kneel isn’t just for show, it lets everyone know what I stand for, what I believe in.”

Tracy says there could be other players who join him in taking a knee. “Everyone has the free ability to choose … either kneel or stand,” Tracy said. “I’m almost positive everybody’s not going to do the exact same thing. At the same time, we are still a team and will still look unified.”

Coach Kirk Ferentz says their discussions included a letter from a veteran who felt very strongly about nobody kneeling — and they had a Navy seal who give a very different answer –saying it’s all about Americans being their authentic selves, doing what they feel is best and stay true to their beliefs. The players plan to hold hands as a show of unity during the anthem.