You are here: Home / News / Drought sparks more bans on open burning than usual in fall 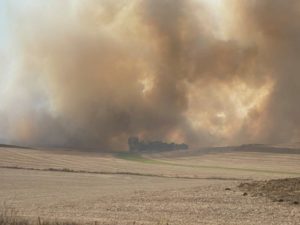 This field fire in Woodbury County burned for several miles.

“Usually it’s less than that, but usually we’ve had more moisture where this year has just been very much a drought statewide,” he says.

Burn bans are not issued by the State Fire Marshal’s office. Local fire chiefs and emergency managers in each county determine there’s an elevated fire risk and issue the ban on open burning in a county. The State Fire Marshal’s website lists the burn bans that are in effect. Most of the 19 counties are in the western half of Iowa.

“Having a very dry summer and now a very dry fall we’ve had a lot of counties go with these burn bans,” Wood says, “kind of sounding the alarm for the dangers of their being field fires.”

A recent western Iowa field fire was one-and-a-half miles wide at one point. Fire officials advise farmers to have a disc nearby as combines roll through a field. If a fire is sparked, the disc can be used to turn over crop residue and create strips of soil to stop a fire from spreading. On a couple of days this fall, northwest Iowa farmers have been advised to halt the harvest due to high winds that could quickly spread a fire sparked by a combine.