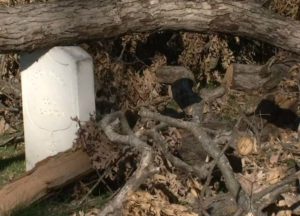 More than two months after the derecho hit eastern Iowa, cemeteries are still assessing the damage.

Century-old trees are down and headstones toppled at both Oak Shade Cemetery in Marion and Oak Hill Cemetery in Cedar Rapids. Marion interim parks and recreation director Seth Staashelm tells KCRG TV the damage is widespread. “About 40 to 50 percent of total trees in Oak Shade are a complete loss,” Staashelm says.

The city owns this historic cemetery and Staashelm says safety is a major concern. “There were a lot of liability hangers within the trees so we had the cemetery closed off for quite a while,” Staashelm says. They cleaned up enough for people to use the roads, but are still urging caution as they continue to assess damage over the next couple of weeks, and figuring out how much all this will cost. He says they are telling those who have relatives with headstones or grave markers that are damaged to contact their insurance agent and see if they are covered.

Another option is “The Friends of Oak Shade Cemetery” — which is paying to cover some of the costs for repairs, if those who are buried don’t have family members who can help. “The friends group has been working diligently. They have been marking sections of concern for contractors and us to be able to do our clean up and so the necessary work,” according to Staashelm.

The derecho’s impact was similar at Oak Hill Cemetery in Cedar Rapids. Cemetery board member Linda Langston tells KCRG TV state law says the cemeteries cannot access their perpetual care funds to recover from a disaster. “We’re just able to do the work we have going on here in any given year, the mowing, and the trimming, so an incident like this if we were to anticipate potentially 50-thousand dollars in trying to complete all the work here,” she says. “We do not have the cash on hand to do that.”

Langston, says they’re having conversations with their insurance commissioner, as well as the city, which owns a portion of the cemetery. Oak Hill’s superintendent, Carl Thoerson, says a variety of grave markers have been damaged. “With something like this, it’s anywhere from a small one that’s knocked over to a large one that might be 15 or 20 foot tall that is knocked over. So it’s not a small thing,” Thoerson says.

Thoreson says volunteers have helped lessen the financial hit. “We have had over 100 volunteers in eight or ten different groups that came in here.. those people are great and have saved us a lot,” Thoerson says. The timeline for completion at Oak Hill is April, but both cemeteries say more helping hands would make the work go faster.