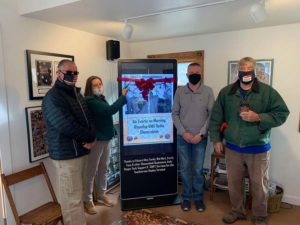 Tim Hill of SWIFT Services, Shelly Warner of SCIA, Stuart Anderson of Walmart, and Bill Hillman of the Everly Heritage Foundation cut the ribbon on a new touchscreen display at the Everly Brothers Childhood Home in Shenandoah.

A new digital element has been added inside the tiny childhood home of the Everly Brothers in Shenandoah.

Don and Phil Everly recorded their first hit — Bye Bye Love — in 1957, but they got their start in the 1940s performing in “The Everly Family” with their parents.

A six-foot-tall touchscreen is now inside the family home in Shenandoah, so visitors can see what else is in the museum collection. Bill Hillman, head of the Everly Brothers Foundation, says the small home just isn’t big enough to hold all the materials.

“We’ve always wanted to get some kind of interactive computers or something that people could look at all the stuff we have,” Hillman says.

The Everly’s home was moved to a spot in downtown Shenandoah years ago. Shelley Warner of the Shenandoah Chamber and Industry Association says they plan to keep adding material to the touch screen terminal.

“Right now we’ve got our movie that we’ve made,” Warner says, “lots of photos and archived items and displays that we don’t have room for in the house.”

Fundraisers for the new digital display were held across the street from the home, at the Depot Deli.

“Every concern we had for the last three years, I think — maybe four, proceeds have also helped go into this,” she says.

Other donations came from the Ed May Family and Walmart. The home is open by appointment only, except for special events when it’s open to the public. Phil Everly died in 2014. Don Everly is 83 and lives in Nashville.