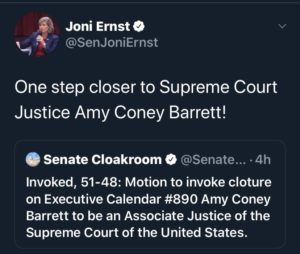 With just over a week to go in the campaign, incumbent Republican Senator Joni Ernst spent the weekend in D.C. taking procedural votes before today’s vote to confirm a U.S. Supreme Court Justice.

Greenfield started out Saturday touring a Waukee hardware store that’s been in business for 140 years. She stood in the back near the shop where snowblowers were being prepped for winter to visit with people, including local YMCA director Eric Kress.

“If there was a topic I’d advocate for, it’d be relief for non-profits in any stimulus funding,” Kress said.

“It is hard because I’d much rather be in Iowa, covering as many miles as possible,” Ernst said.

Ernst said she has a duty to stay in D.C. to confirm Amy Coney Barrett to the Supreme Court.

“How important it is that we continue to fight for Iowa values and she is going to be an incredible Supreme Court justice,” Ernst said. “…We’re hearing that from Iowans, too…Those that watched the hearings, I think her support has just become more and more firm.”

This race is the most expensive in Iowa history and Iowans are being bombarded with advertisements. With eight days left in the 2020 campaign, Ernst said the ground game is what’s most important to her.

“Those ads are becoming ineffective, I believe,” Ernst said. “But what we’ve told supporters is: ‘Talk to your neighbors. Talk to people on the fence, because they will believe you more so than they will some random TV ad.'”

Greenfield is emphasizing the ground game, too.

“We’re on the phones, we’re texting and we’ve really been working hard to build what I call more of a neighbor-to-neighbor contact program where you’re responsible for your block, for your neighborhood — just talking to people when they’re out mowing the lawn, more casual relationship building,” Greenfield said. “Must be working. People are voting.”

As of Saturday, more than 722,000 Iowans had already voted early.