You are here: Home / News / Ernst says Pence won’t be needed to break tie on Barrett 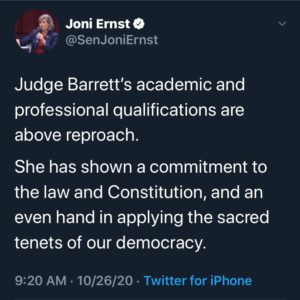 Republican Joni Ernst says she and other senators will follow public health guidelines and keep their distance from Vice President Pence if he enters the Senate for tonight’s Supreme Court confirmation vote. Five aides to the vice president, including Pence’s chief of staff, have tested positive for Covid.

“There are ways that we can safely move people around in the Senate,” Ernst said Sunday afternoon. “Chuck Grassley through the last couple of days has actually been sitting at the back so that he is distanced from a lot of folks.”

Pence, as vice president, is able to serve as the senate’s presiding officer and cast a tie-breaking vote.

“I hope we just have enough votes that having the vice president wouldn’t be necessary,” Ernst told Radio Iowa.

Republicans do have enough votes to confirm Amy Coney Barrett, but Pence says he doesn’t want to miss being present for the historic vote. Ernst said everyone on the Senate floor is wearing a mask.

“That’s one of our senate rules right now, so it’s important that we are following the CDC guidelines. We will continue to do that,” Ernst said. “I am certain the vice president will be monitored that whole time and then I would anticipate we would all need to keep our distance, as required.” 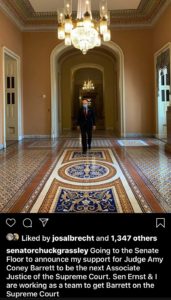 Senators debated Barrett’s nomination on the Senate floor over the weekend. Senator Chuck Grassley said it’s “pointless” to speculate about how Barrett might rule on the Affordable Care Act. Grassley said Barrett’s essay that criticized a previous Supreme Court opinion is about a section of the law that’s no longer in effect.

“This all then is just a Democrat election year scare tactic and they’re using it almost totally as the reason to vote against Judge Barrett,” Grassley said.

Grassley also responded to the Democrats’ argument that the Republican-led Senate should have confirmed President Obama’s Supreme Court nominee before the 2016 election.

“Let’s not forget the same Senate Democrats just four years ago declared: ‘The court needs nine to function properly,'” Grassley said. “Judge Barrett is that nine, only four years later, they don’t seem to think so.”

Democrats during this weekend’s debate called Barrett a “skillful judge” who will undermine abortion rights and they predicted she will join conservatives on the court to overturn same-sex marriage and the Affordable Care Act.