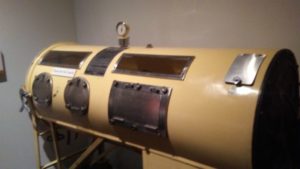 “World Polio Day” was observed this past weekend, marking the near eradication of the fatal disease.

Siouxland district health director, Kevin Grieme says there are parallels between the polio outbreak in the 1950s in Iowa and the current COVID-19 pandemic.

“The first efforts that they took a look at, is they wanted to protect the health care industry — the health care providers. They were truly concerned about having nurses available. Because there were also some fears, concerns, and some reservations of treating a case of polio — because there wasn’t a lot know of it at that time,” Grieme says. “Two was the ability of the health care community to absorb the potential cases that come in.”

Sioux City was the site of a major outbreak with the first polio case reported on May 1st of 1952, although the disease had been around since the 1930s. Grieme says nearly 16-thousand local children gamma globulin to help treat the disease and Sioux City was one of three sites chosen nationally to take part in what was the largest field test in medical history.

“People were scared for one purpose — and that was simply to fight the disease. And I think we find ourselves at that sort of crossroads. And I think the wearing of the masks, looking at ourselves, our personal behaviors,” Grieme says. He says the series of recommendations given to prevent polio are much the same as we hear for coronavirus.

“Wash hands and face before eating. Teach children to keep their hands away from their mouths. Use only clean food and beverages. “Avoid overfatigue and chilling — these often predispose to polio. Keep away from people with respiratory infections — polio often starts as colds, keep away from crowds,” Grieme read.

Grieme says one unusual possible cure was quickly disproven. “Do not use DDT as a polio preventative measure. It’s been shown to have effect with insects and mosquitoes, but it has not been shown to have affect with cases of polio,” Grieme says. Around five-thousand Woodbury County children were part of a nationwide test of the Salk vaccine to stop the pandemic, and many patients were hospitalized in “iron lungs” to help with their breathing — similar to the respirators used for today’s COVID patients.