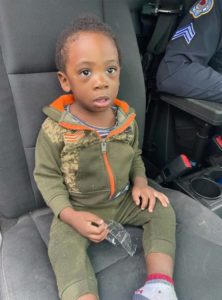 The Ottumwa Police Department responded to a call at around 10 a.m. today that a child was walking alone in downtown Ottumwa.

Ottumwa police found the boy, walking without shoes, near the intersection of Second Street and Cooper Street. Officers estimated the boy as between two and three years old.

Officers went door to door looking for the parents or where the child may live, but were unable to determine where the child came from. At about 2 p.m., police announced the child’s parents had been located and contacted.