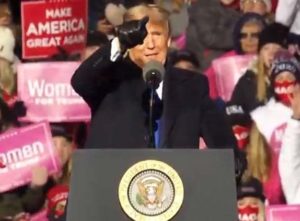 President Donald Trump rallied tonight with thousands at the Omaha airport, urging the Nebraskans and Iowans in the crowd to deliver a thundering defeat to Democrats.

“I’m standing here freezing. I ask you one little favor: get the hell out and vote,” Trump said, to cheers. “The great red wave.”

While Iowa awards its six Electoral College to the presidential candidate who wins the state, three of Nebraska’s are awarded by congressional district and the Electoral College vote from the district that includes Omaha is up for grabs. Trump conducted a sort of applause meter test at the start to gauge the make-up of the crowd.

“Who’s from Iowa?” Trump said, getting a level of cheer that far eclipsed by the roar when he asked: “Who’s from Omaha?” Trump told the crowd, “we would be in Iowa soon.”

That’s likely a reference to the Des Moines rally Vice President Mike Pence is scheduled to headline on Thursday afternoon. Iowa Senator Joni Ernst was at the rally tonight, but did not speak from the stage.

“Joni, thank you very much and I heard you’re doing very well. I just saw some very nice numbers,” Trump said, adding that his own standing in the polls “looks very good in Iowa.”

As he did during a Des Moines rally earlier this month, Trump mentioned the $28 billion in federal payments his administration has forwarded to farmers to make up for lost trade. Trump touted ethanol, too.

“As president, I will also defend ethanol, OK? All right? Does Nebraska like ethanol, too, by the way?” Trump said, and the crowd cheered. “OK, good. I need that little assurance.”

Trump began last night by promising to deliver a safe vaccine that will eradicate Covid.

Recent polls have shown the presidential race in Iowa to be a virtual tie. Joe Biden will campaign in the state Friday, his first trip to the state since he won the Democratic Party’s presidential nomination.