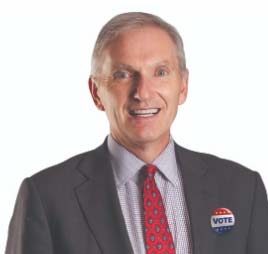 Iowa is again among the small group of battleground states that may decide this year’s presidential election. David Schultz is the author of “Presidential Swing States: Why Only Ten Matter”  and he puts Iowa is that group.

David Kochel, who managed Mitt Romney’s Iowa campaign in 2012, said Donald Trump’s nine-point margin of victory in Iowa four years ago was a bit of “an outlier and it was all based on a deep-seeded antipathy to Hillary Clinton. Other than, of course, Chuck Grassley’s races and a few of Governor Branstad’s, we’ve had competitive elections at almost every level.”

Romney’s running mate held an Election Eve rally at the Des Moines airport back in 2012. And, on the same night, President Obama rallied with thousands in downtown Des Moines. Brad Anderson was state director of President Obama’s 2012 Iowa campaign.

“As Iowa becomes more and more of a battleground state, which all of the polls suggest that it is, it is smart on both campaigns parts to schedule a visit here in the closing days of the campaign,” Anderson said.

Vice President Pence will headline a rally at the Des Moines Airport Thursday afternoon and, on Friday, Democratic presidential nominee Joe Biden is scheduled to campaign in the state. Drake University political science professor Dennis Goldford said in-person appearances are a boost because ads have diminishing returns at this point in the campaign.

“Face-to-face, even in a pandemic era, is a welcome change. That’s why the president does so much of it,” Goldford told Radio Iowa. “But even for Vice President Biden to come to Iowa, he’s showing the flag.”

Twenty years ago, Al Gore beat George W. Bush in Iowa by fewer than 5000. In 2004, Bush won the state by about 10,000. Both margins of victory were less than one percent. Recent polls have shown the 2020 presidential race in Iowa may be just as close.