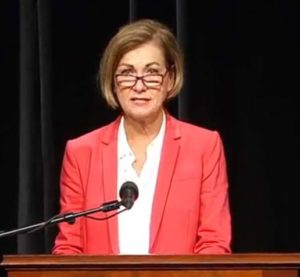 Governor Kim Reynolds is asking a federal official to reconsider and approve using $21 million in pandemic relief money on new computer software for the State of Iowa.

A few weeks ago, the Inspector General in the U.S. Treasury Department notified Reynolds that Covid relief funds couldn’t be used because state officials signed the contract to buy the software a year ago, before the pandemic began.

Reynolds had asked the Republican-led Iowa legislature to provide money for the computer upgrade, but it was not included in the budget lawmakers submitted to the governor in June. The governor’s legal counsel said in a letter that to the Inspector General that the state’s aging computer system has inhibited Iowa’s response to the pandemic and the new system will help Reynolds and her staff be more agile in making budget decisions.

The no-bid contract for the software bypassed standard procedures that would have allowed other companies to compete for the state’s business. The contract was signed with a firm called Workday, after the governor’s former chief of staff was hired as a lobbyist for the company. Officials used some unspent money in the Department of Administrative Services budget to pay the contract until the federal pandemic relief money became available.

The governor’s attorney said the computer upgrade is necessary to ensure state employees can work remotely during the pandemic.