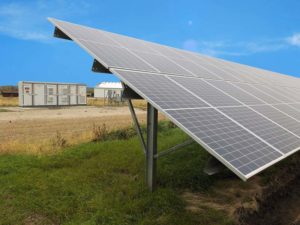 Alliant Energy has unveiled what it calls its “Clean Energy Blueprint” for Iowa by moving toward more renewable sources of power — including solar, more battery storage, and changes at two coal-fired electric plants.

The president of Alliant’s Iowa Energy Company, Terry Kouba, says the plan includes adding up to 400 megawatts of solar power by 2023. That will go along with the wind energy already produced.

“By the time that’s all done — our generation portfolio will be about 50 percent renewable energy,” Kouba says. “So, a pretty big shift from what about a decade ago was heavily reliant on coal-fired generation — not too much more reliance on renewable energy.”

They also plan to convert the Burlington coal plant to run on natural gas.  He says that plant can already run on natural gas and it will take some minimal upgrades to fully move it over. “Doing that and keeping that in service gives us some flexibility with respect to the types of units we have available as we are making this transition to more renewables just to make sure that we have good reliable service for our customers,” according to Kouba. The Burlington plant transition will happen in 2021.

Kouba says as they studied the plan for the future they found making the changes to more renewables would save money in the long run. He says they hope to no have to raise electric rates in the near future. “So we’ll take this new plan which will be ultimately overall less cost than the previous plan and take that into account as we continue planning for any potential rate cases in the future,” Kouba says. “Right now we are working with a plan where we are going to be staying out of rate cases for a number of years.”

The company has already built a new natural gas generating plant in Marshalltown to replace a coal-fired plant. And it has existing solar farms in Dubuque, Marshalltown, and Cedar Rapids. Alliant Energy is exploring how battery storage can enhance the reliability of solar power by storing excess power that’s generated when the sun is most powerful and then release the energy, as needed.