You are here: Home / News / Greenfield tests negative for Covid, back to campaigning 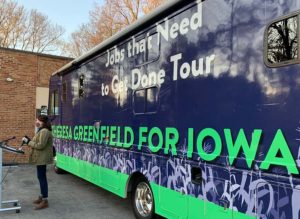 Theresa Greenfield, the Democrat challenging Republican Senator Joni Ernst’s bid for reelection, is returning to the campaign trail this afternoon after testing negative for Covid.

Greenfield canceled campaign appearances Wednesday after learning some of her campaign staff had been around a person last week who later tested positive for Covid. According to a campaign statement, Greenfield and her staff have been tested, all received negative results and Greenfield has had two negative Covid tests in the past week. Greenfield will resume in-person events and press availabilities — all outdoors — and masks are required.

“Theresa didn’t get very far on her RV tour, did she? No, no. She’s been hiding in the basement because she might have to answer a question,” Reynolds said, as seen in video posted by Caffeinated Thoughts blogger Shane Vander Hart.

Iowa Democratic Party chairman Mark Smith this morning called the governor’s remarks are an example of the cavalier attitude Republicans have taken toward the pandemic.

“This is offensive and it is appalling,” Smith said during an online news conference. “Iowans have sacrificed for eight months to help contain this virus.”

Smith said it’s “irresponsible” for Vice President Pence to host an in-person rally this afternoon at the Des Moines airport. Democratic presidential nominee Joe Biden will hold a drive-in rally in Des Moines tomorrow, with the crowd seated inside their own vehicles.