You are here: Home / News / Plague doctor mask a big Halloween seller at one shop 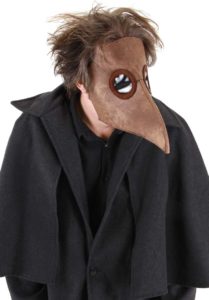 Despite the pandemic, many Iowa communities are still holding trick-or-treat nights for kids this weekend, while some adults are hosting socially-distanced Halloween parties.

Juanita Cameron is a clerk at the Theatrical Shop in West Des Moines, which specializes in costumes. She says one particular mask is selling big this fall. “That plague doctor mask with the pointy nose, it’s brown,” Cameron says. “Of course, plague says it all, so I think they just want to show people that they’re in the mood.”

While health care workers are being seen by many as heroes during the COVID-19 plight, Cameron says very few people are dressing up in scrubs or other costumes to resemble doctors and nurses. “Interestingly enough, I have not sold any,” she says. “People are going towards superheroes because they want to see victory at the end of what’s going on.”

The popular superheroes this Halloween include old favorites like Superman, Batman, and Spiderman. With the election days away, Cameron says political candidates are also making for sought-after costumes. “The most popular ones are the presidential nominees, Mr. President and also Mr. Biden, so those are very popular,” Cameron says, laughing. “We even have Dr. Fauci.”

It’s said that imitation is the most sincere form of flattery, and if that’s the case, Trump is leading Biden at her store. “Most of them are getting the Trump wigs,” she says, “so I would say the Trump wigs are going out faster than the Biden mask.”

Forecasters say it’ll be a chilly weekend for trick-or-treaters, with lows expected both tonight and Saturday night in the 20s and 30s across the state.