You are here: Home / News / ‘We’ve had a great run together,’ Trump tells Iowa supporters 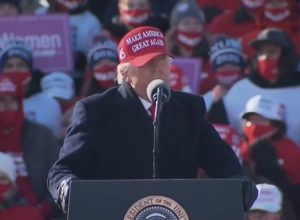 At a windy outdoor campaign rally in Dubuque Sunday afternoon, President Trump promised what he described as a “super boom” in the U.S. economy if he’s reelected.

“Our country has such unbelievable potential, let’s not blow it,” Trump said. “Go vote.”

The Trump campaign distributed hand warmers to the crowd to combat below-freezing temperatures in a brisk November wind. Trump invited several Iowa Republicans who’re on the 2020 ballot on stage, including Joni Ernst, the U.S. Senator who’s seeking a second term.

“President Trump, we love you! Thank you so much. God bless you. There is not a finer president and one that has done so much for our farmers,” Ernst said. “…Iowa loves you. I love you. Four more years!”

Ashley Hinson and Mariannette Miller-Meeks — the two Republicans running in the congressional districts the border the Mississippi River — spoke as well.

“Iowa is Trump country!” Hinson said, to cheers, and Miller-Meeks was cheered as well when she promised: “We’re going to say to Nancy Pelosi: ‘You’re fired.'”

“Thank you very much Iowa and we appreciate it,” Trump said, to cheers. “And we’ve had a great run together and I’ve been working very hard with the farmers and making them, hopefully, very rich.”

Governor Kim Reynolds mentioned the poll’s margin for Trump when the president invited her on stage.

“We are going to bring it home!” Reynolds said. “We’re not satisfied with seven. We’re going for 10!”

“Iowa’s going to go for you big time,” Grassley said.

Former Governor Terry Branstad, who until the end of September served as Trump’s Ambassador to China, gave a short speech, too, praising the president’s approach to trade negotiations with China.

Iowa Democrats criticized Trump for holding another large, in-person rally in the state. Pam Jochum, a state senator from Dubuque, called Trump the “Covid Spreader-in-Chief” during an online news late Sunday morning. In a written statement Biden said Iowans deserve someone who will fight for them and he accused Trump of giving up on trying to contain the virus.