You are here: Home / News / Masks, hand sanitizer and some Plexiglas at Iowa polling places 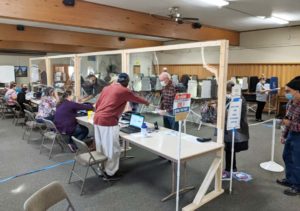 A precinct in Marshalltown.

State officials distributed 200,000 face masks to the 99 county auditors who are in charge of conducting today’s election.

Emmet County Auditor Amy Sathoff says the disposable masks are for precinct workers and for voters.

“We are trying to keep everyone as safe as possible,” Sathoff says. “I would ask that if they could, please wear a mask. Protect my precinct workers and themselves.”

Jasper County Auditor Dennis Parrott says Plexiglas was installed at precincts in his county as a safety barrier between voters and poll workers.

“So that people can feel comfortable when speaking back and forth to them,” Parrott says. “We’re making sure that this is a fair and secure election.

Nan Benson, election director for Marshall County, says the changes made to accommodate the pandemic seem to be working.

“One of the new things this election is the disposable protector that goes over the ballot and trying to feed it into the machine is a little bit tough,” she says, “but it’s nice with COVID that we don’t have to wipe all those plastic sleeves down each time.”

The state distributed 1,500 gallons of hand sanitizer to be used at precincts today. In one Des Moines polling place, Iowa Public Radio reported the ballot reader briefly quit working this morning, but officials quickly determined it was because voters and poll workers were using too much hand sanitizer.

State officials say nearly a million Iowans voted early, with an absentee ballot. Hamilton County Auditor Kim Schaa says by November 1, there were nearly 10,000 registered voters in her county — and a significant number asked for an absentee ballot.

“The total number we had requested was 4,753, so it was very busy out here the last few days before the election.”

And Schaa says precinct workers are busy today at polling sites in her county.

“We’ve had some lines at some of them, but everything seems to be going well so far,” Schaa says.

The Regional Event Center in Spencer is serving as the voting site for several precincts today, “for everyone that lives in the City of Spencer as well as the townships that surround Spencer of Summit, Riverton, Meadow and Sioux as well as the City of Fostoria,” says Clay County Auditor Marjorie Pitts.