You are here: Home / News / Iowa voters reject constitutional convention call by more than 2-to-1 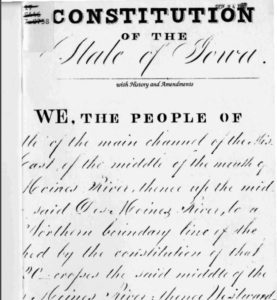 While several close races captured much of the attention in the election coverage, there was a clear decision by Iowa’s voters on calling a constitutional convention.

This year’s General Election ballot asked voters if there should be a convention to revise the state’s constitution. It’s a question that’s required to be submitted to Iowa voters once every decade.

A constitutional law professor at the University of Iowa says such a convention is only appropriate if voters think the system is fundamentally broken and needs significant changes.

Iowa’s constitution was ratified in 1857 and has since been amended 48 times.