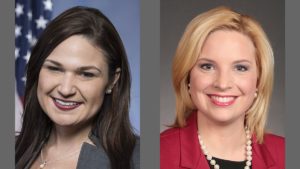 The Iowa Secretary of State’s website shows Hinson with about 11,000 more votes than Finkenauer — out of the 412,000 tabulated in the first congressional district. Finenauer issued a written statement, saying she respects the democratic process and the will of the voters.

Finkenauer, who grew up near Dubuque, represented the city of Dubuque in the state legislature for four years before winning a term in the U.S. House in 2018.

Hinson is scheduled to speak with reporters late this afternoon.