You are here: Home / News / Iowans get a warning of what may be ahead on Winter Weather Awareness Day 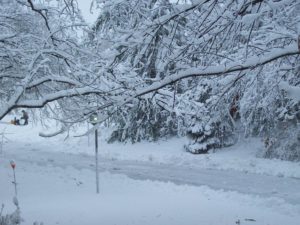 Iowa’s seeing temperatures some 15 degrees warmer than normal the past few days, but forecasters warn much colder weather will arrive late Sunday, with snow possible.

Today is Winter Weather Awareness Day and National Weather Service meteorologist Cory Martin says it’s an appropriate time for a refresher about the dangers we may soon face.

“Wintertime possesses a wide range of threats to the public, whether it be exposure to extreme cold, vehicle accidents, slick roads and other hazards caused by heavy snowfall,” Martin says. “It’s just a day that we take a look at those hazards that we can expect through the duration of winter.”

Wide sections of Iowa already had an early, heavy snow during a squall that hit in mid-October, dumping up to nine inches of snow in some areas.

“It was definitely a little taste of what’s probably to come,” Martin says. “We know that even in winters where we see well-below-normal snowfall, we still usually get something that comes through and has a significant impact on transportation and other aspects of our lives.”

Some forecasters predict a harsh winter is ahead, but Martin says we’re just starting to make some educated guesses.

“We’re in a La Nina pattern as we go into this winter,” Martin says. “What that means for Iowa, it’s not a strong signal necessarily one way or the other. Usually, just to our north, you’re looking at below-normal temperatures and maybe a snowier winter than what you’d typically see. Will that drop as far south into Iowa? We’re going to have to wait and see.”