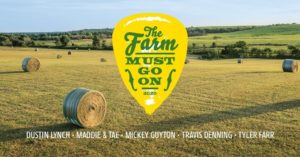 Nate Clark of Bettendorf, president of the John Deere Foundation, says the show is called “The Farm Must Go On” and it will feature a string of country music’s rising stars who are raising money for the Farm Rescue organization.

“Farm Rescue helps farmers and ranchers bridge crises so their operations and livelihoods can continue,” Clark says. “For farm and ranch families who have experienced an injury, an illness or a natural disaster that prevents them from operating, Farm Rescue provides planting, haying, harvesting, and livestock and feed assistance.”

Founded in 2005, Farm Rescue serves farmers in Iowa and six other states. The group’s goal is simple, Clark says, as it bands together neighbors and strangers to help those in need.

“Farm Rescue shows up with the volunteers,” Clark says. “There are over a thousand of them across the United States who help. It brings the machines and we’re lucky to provide some of the machines for Farm Rescue to operate. And then it provides the compassion that is so special about our rural communities.”

The concert will be broadcast live from the Brooklyn Bowl in Nashville. There is no admission charge to watch the show, though viewers will be encouraged to donate, even a few dollars. Since it’s the first time Quad Cities-based John Deere has been involved with a virtual benefit concert, Clark says there’s no specific fundraising goal.

“Currently, Farm Rescue is serving seven Midwest communities,” Clark says. “We want to see them grow and expand and have their capacity to improve the lives of farmers grow and expand, so anything that guests to the concert are willing to donate, that’s welcome.”

The concert will air the evening of December 9th on YouTube. The headliners include Dustin Lynch, Mickey Guyton, Maddie & Tae, Travis Denning and Tyler Farr.