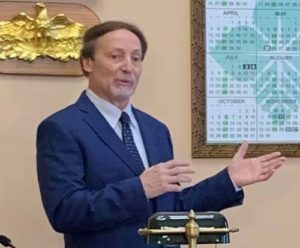 Due to human error, Iowa Secretary of State Paul Pate says the unofficial election night results were “over-reported” in one precinct in central Iowa’s Jasper County.

“This discrepancy impacted candidates in both political parties, non-partisan candidates, judges and statewide public measures,” Pate said during a news conference in the Jasper County Courthouse. “The major race that was impacted here was the second congressional race.”

Current results posted on the Secretary of State’s website show Democrat Rita Hart now leading Republican Mariannette Miller-Meeks in that congressional district by just 162 votes. Preliminary results posted early Wednesday morning showed Miller-Meeks ahead by 282. The difference is attributed to revised results from a precinct in Mingo. Jasper County Auditor Dennis Parrott said the error was not in Mingo, but someone in Newton at the auditor’s office entered the results incorrectly on a spread sheet.

The secretary of state has ordered that all votes cast in Jasper County be recounted. The ballots cast on Election Day in the Mingo area precinct will be recounted by hand. Parrott indicated the recounts may take all weekend.

“All of us are humans, we make errors, we make mistakes,” Parrott said. “I’m no different, you’re no different, but the system is built so that when we do, we can correct those.”

Parrott, as well as Pate, stress that all results statewide are unofficial at this point. Pate said that allows results to be double-checked, plus absentee ballots to be added before what’s called the official canvass next week.

“That’s what all of the counties are going at this stage and that’s why we feel much more comfortable that the new numbers that Jasper’s putting out there are accurate,” Pate said. “Now that we’re asking for the audit and the recount, we’ll wait and see what those show — and that’s part of the process, and then the board of supervisors will meet to do the formal certification process when all this is completed.”

The Jasper County Auditor says his sole concern is accuracy.

“The results will make one side happy and the other side unhappy,” Parrott said. “Let me tell you this: the Jasper County Auditor’s office is the zebra in the game. We’re the official. We don’t take sides and everybody from Jasper County knows that we don’t.”

The Miller-Meeks campaign issued a written statement this afternoon, calling for more thorough explanation of the error.

“We do not agree with the Jasper County Auditor and the Secretary of State’s Office that there has been sufficient transparency concerning the machine irregularities and the auditor’s own claims that human error in the tabulation process arose after results were reported. We have demanded additional information because those unexplained discrepancies have the potential to alter the election outcome. We expect to receive that information immediately,” said the statement, which was attributed to her campaign.

“As we have said consistently, Iowans’ voices must be heard and their votes accurately counted,” said Hart campaign manager Zach Meunier. “It is thus critical that county auditors ensure all results are accurate. We understand that the county auditor of Jasper County is undertaking an administrative review to ensure that the vote totals from that county — which have been verified by Iowa’s Republican Secretary of State Paul Pate and the Jasper County auditor and which show Rita Hart leading by 162 votes — are accurate. We are confident by the end of this process that Rita Hart will be the next congresswoman from Iowa’s Second District.”