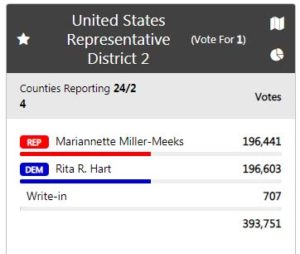 The total number of votes for the race that’s listed on the website has also changed, by more than 200 votes. On Wednesday morning, the Secretary of State’s website showed Miller-Meeks leading by 282 votes.

Secretary of State Paul Pate and the Jasper County Auditor will be holding a news conference late this morning in Newton, which is in the second congressional district. WOI in Des Moines reports state officials gave the Jasper County Auditor permission yesterday to recount ballots in one precinct after noticing the tabulation from that precinct was eight votes short of what it should have been.

Jasper County Auditor Dennis Parrott told the station a counting machine had malfunctioned in that precinct and ballots were getting jammed.