You are here: Home / News / Some snow in the forecast as warm Novembers days to go away 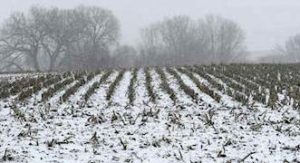 This could be the scene again soon with snow in the forecast.

While many Iowans have enjoyed the unseasonably warm weather the past several days, it’s all about to change.

Meteorologist Andrew Ansorge, at the National Weather Service, says the sunny days with high temperatures in the 60s and 70s will shift late tonight and into tomorrow as a cold front arrives, bringing the possibility of snow.

“The best chances for that will be over the northwestern part of the state where the cold air will be deep enough for some of the precipitation to turn wintery,” Ansorge says. “I’m not looking at anything too heavy or crazy for early November but they could certainly see some wintery mix up in those parts of the state.”

Highs by Wednesday are only expected in the 40s and 50s, while some areas may not even get out of the 30s. As for the possible snowfall, he’s not predicting a blizzard, by any means. Ansorge says, “Right now, we’re forecasting right around an inch, maybe two inches in a spot or two, but overall, they’re generally looking at less than an inch in many locations.”

The weather of the past week brought high temps perhaps 15 degrees above normal, and while we’re in for a chilly several days, he says we may yet see another warm wave before winter sets in late next month. “We’re certainly looking at a cool spell for this week,” Ansorge says, “but there’s still the potential in November and even into December where you can get a day or two with a little short spell of weather that’s above normal.”

See the full forecast at weather.gov.