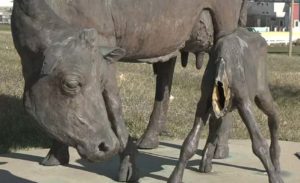 An effort is underway to save a derecho-damaged cow sculpture done by Norma “Duffy” Lyon — who sculpted butter cows at the Iowa State Fair for more than 40 years.

It stands near the town of Toledo and is one of the only large-scale works Lyon did that was not made of butter. It’s known as the “Cow Calf” sculpture — and the head of the calf was ripped off by the derecho.

Toledo Mayor Brian Sokol tells KCRG TV the city wants to help. “I think we really owe it to not only the community but the Lyon family to continue this tradition and the legacy of the family and rebuild this butter cow,” Mayor Sokol says. Despite the damage, they were able to find all the missing pieces, including the head of the calf. Now their plan is to not only put it back together but preserve it for the long haul.

Duffy’s son Eric says the plan is to have it bronzed, which comes at a cost. “Maybe in the 50 or 60 thousand (dollar) range,” Eric Lyon says. “So it’s a lot of money, we think it’s a worthwhile project that will do the community well for a long time.” Mayor Sokol says they are looking for sources of funding.

“We’re gonna hit as many grants as we can but it’s still going to take you know, several thousand dollars’ worth of private donations,” Sokol says. The Iowa State University Foundation has a sculpture fund to create a bronze replica of the Cow Calf sculpture for display at the Veterinary Field Services Building. The project is estimated to cost more than 100-thousand dollars which they are fundraising for currently. The mold from that project will then be used to help bronze the original sculpture in Toledo, which will save on some of the cost there.

Mayor Sokol said donations for the efforts in Toledo can be sent directly to the city or to the chamber of commerce.