You are here: Home / Fires/Accidents/Disasters / Hundreds of ducks killed after landing on Iowa highway in storm 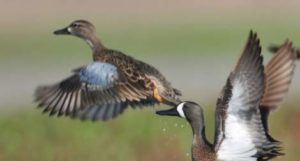 The Iowa DNR says a unique weather phenomenon led to the death of several migrating birds in northwest Iowa.

“Be it a wetland or lake and landed there. And then in those very dark conditions, it would be very disorienting to have vehicles coming by with their headlights on– so a lot these birds mistakenly landed on the pavement and then were struck by moving vehicles,” Jones says.

Jones says it was just a bad combination of weather and the area where they landed. “It would have been very dark with rain or freezing rain…so it would be very easy for them to be disorientated under those conditions,” according to Jones. “Some of them probably figured it out and were able to get back in the air and find a more suitable location. Others were probably still trying to figure that out as vehicles approached.”

State Conservation Officer Steve Griebel, of Woodbury County, says he started getting phone calls and text messages about ducks on the road around 9:30 p-m. Monday. He found more than 200 ducks dead along Highway 20 toward Highway 71. Jones says this is the time of year when all of the conditions can come together and create this issue.

“October and November are when Iowa has its highest waterfowl migration — so while this is a kind of rare tragedy to have this happen — it does happen every so often,” Jones says. He says it didn’t seem to be widespread. “It seems to be relatively localized to the Cherokee, Woodbury County are. So, it just happened to affect the birds who were migrating through or over those counties,” Jones says.

The DNR says this the most famous occurrence of this type of weather phenomenon that happened on Armistice Day in 1940. Temperatures that day started in the mid-50s and ended with more than a foot of snow, and 150 people and thousands of livestock dead.