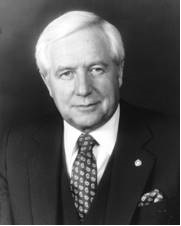 Former Iowa Senator Roger Jepsen, a Republican, has died at the age of 91.

Jepsen, a Cedar Falls native, worked in the insurance industry before his career shifted to politics, He died in at a hospice in Bettendorf on Friday. Senator Chuck Grassley announced his former colleague’s death on Twitter this weekend.

Jepsen first won elected office in 1962, as a Scott County Supervisor. He served two years as a state senator and then two terms as Iowa’s lieutenant governor. He defeated incumbent U.S. Senator Dick Clark in 1978. Jepsen lost his bid for reelection in 1984 to Democrat Tom Harkin.

In 1985, President Reagan appointed Jepsen to the National Credit Union Administration and Jepsen served in the agency until his retirement in 1994.