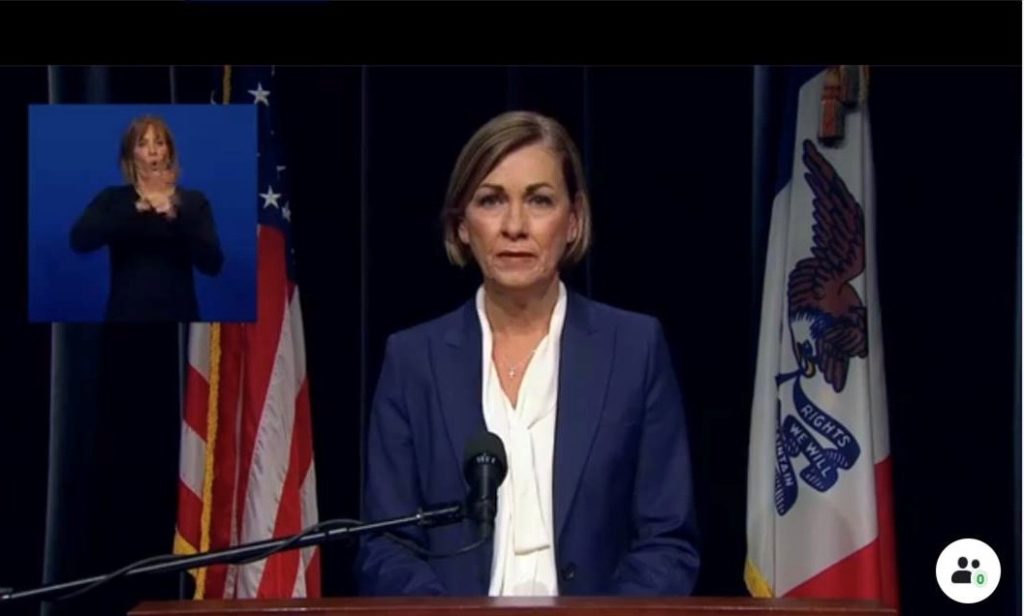 Governor Kim Reynolds tonight said Iowa’s health care system is being “pushed to the brink” and she has issued a statewide mask mandate for many public places.

“If Iowans don’t buy into this, we lose,” Reynolds said. “Businesses will close once again. More schools will be forced to go online and our health care system will fail and the cost in human life will be high, so now is the time to come together for the greater good.”

The governor’s new public health emergency proclamation goes into effect at midnight. Reynolds, a Republican, is ordering bars and restaurants to start closing at 10 p.m. and masks are to be worn by staff and by customers when they’re not sitting at a table. Face coverings will be required indoors, in public spaces and state buildings when someone cannot stay six feet away from others. It will not apply to schools.

The governor is also limiting the crowd size for weddings, funerals and other gatherings to 15 people indoors and 30 people outdoors. These limits apply to family gatherings, too.

“I don’t want to do this, especially as we’re coming into a holiday season that is normally filled with joy,” Reynolds said, “I cherish Thanksgiving with my family and this year we’re postponing that.”

The crowd size limits do not apply to businesses and the governor is providing exceptions for religious gatherings as well as high school and college sporting events. During a live address broadcast to Iowans tonight, Reynolds cited troubling trends. More than 52,000 cases of the virus have been confirmed by testing in the past two weeks and the number of Iowa hospital patients with Covid has doubled in the past two weeks.

“About 5% of Iowans with Covid-19 require hospitalization and because of the increase we’ve seen over the last two weeks our health care system is being pushed to the brink,” Reynolds said.

AUDIO of the governor’s address

Reynolds began her speech by saying she’s worried Iowans have grown complacent because most Iowans who get the virus have mild symptoms, or none at all.

“In late October new daily hospitalizations were just approaching the 100 mark. Now, just a few weeks later, they have topped 200 a day and that is not sustainable,” Reynolds said. “If our health care system exceeds capacity, it’s not just Covid-19 we’ll be fighting. Every Iowan who needs medical care will be put at risk.”

The governor suggested these new restrictions might be tightened if hospital conditions worsen.

“It’s up to all of us so that the worst case scenarios…don’t become a reality,” she said.

Reynolds acknowledged these measures may be unpopular, but she urged Iowans to follow these new guidelines.

“Look out for each other, not because you’re told to,” Reynolds said, “but because it’s the right thing to do.”

As of tonight, the state’s coronavirus tracking website shows there were more than 1500 Covid patients in Iowa hospitals — that’s one in every four patients and Reynolds warned that trend will get worse due to the number of active infections in Iowa.

The head of the state teachers union said he was disappointed the governor had failed to require face masks in schools. The Iowa Democratic Party’s chairman said the new restrictions fall far short of what’s needed to relieve the stress on Iowa’s hospitals and frontline workers. The leaders of Democrats in the Iowa House and Senate said the governor’s new actions are “too little, too late.”

Both of Iowa’s Republican U.S. Senators praised the governor’s actions — and urged Iowans to wear a face mask.